Remember my first blog entry about Land Use Plans and Provincial Physical Framework Plans? One thing that was missing during that time is that I was not able to take the granularity up to the City/Municipal level because I lack the necessary skillset in data cleaning before. Also, the data that I used before was as of 2015.

But thanks to the people from the Philippine Environmental Planning community that I was able to get a more recent data, which was as of 2nd Quarter of 2019. This dataset looks a lot better and cleaner compared to the previous one that I got. The older one has a really messy date column.

So then, presenting the CLUP Status Monitoring Dashboard! (Oops it looks a lot better in full screen! Click the full screen mode on the lower right of the dashboard)

Simple instructions on how to use it:

How I Made the Dashboard (and other data janitorial stuff)

I got the data from HLURB, but as usual, the problem is that it’s in PDF format. So I had to convert it into an excel file. But…it imposed more problems. The raw data of the PDF file seems to have it on repeat header rows, so I had to manually erase those rows one-by-one.

After so, I did the rest of the cleaning using python. You can check the code here.

But to summarize the steps on further cleaning the excel file:

Once I’m done with the dataset, I loaded them to Tableau. For the dashboard, I chose two (2) charts: 1.) Categorical Map and 2.) Stacked Bar Charts. I just made a few interactions for the two especially on the click-and-action stuff so that it would be easier for those who will use.

1. The provinces of Maguindanao and Lanao Del Sur have the most number of cities and municipalities who do not have CLUPs yet. 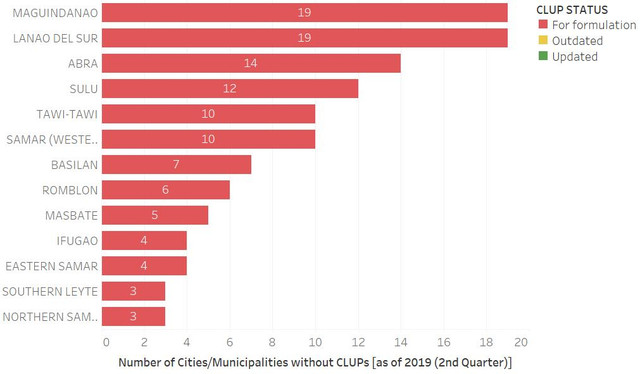 Oops. I guess the cities/municipalities of these two (2) provinces should catch up on what they want to be 10 or 20 years from now. It’s for their children and grandchildren’s sake.

2. We have a lot of outdated CLUPs, and this could be a future problem on how we use our land in the Philippines.

If you noticed the dashboard, we have a lot of areas still colored in yellow. Outdated CLUPs are a big problem as we would not know how to shape our land as a resource. Outdated CLUPs also mean that they are not anymore aligned with the national plans of our country - such as railroads to be constructed in the future. Lol kidding aside, there are 6 LGUs whose CLUPs are super outdated already (their last plan was 1978). Three (3) are from Region V, two (2) are from BARMM, and 1 from CAR.

Speaking of Marawi City, I’m assuming that their CLUP is currently on the works now because of the last year’s events, and I hope and pray that the people there are brimming with hope on making their city a better one. So they should really start with a CLUP!

Anyway, I hope This will be useful for HLURB and other planners to easily monitor which areas do not have CLUPs yet. If you are from the LGU and you need assistance in crafting CLUPs, please refer to the Philippine Institute of Environmental Planners and look for your local PIEP Chapter!

“Make no little plans; they have no magic to stir men’s blood and probably will themselves not be realized. Make big plans; aim high in hope and work, remembering that a noble, logical diagram once recorded will not die.”

I am a mapper, urban planner, and aspiring geodata scientist.